A rich resource of more than 100 easy, timeless ideas on building strong families, developing the academics, supporting the schools, and more.
Buying Options 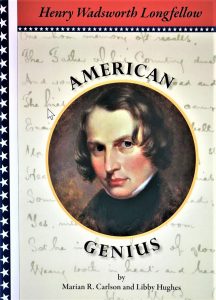 The life story of Longfellow is full of drama, romance, and tragedy. The poet was born in a small seaport village in Maine where he began his dreams gazing across the vast ocean. His fame reached far and wide, drawing him into the highest circles of society. Though sorrow came with the poet’s success, he continued to produce some of his most eloquent works, still quoted more than 200 years after his birth, such as: Paul Revere’s Ride, A Psalm of Life, The Courtship of Miles Standish, and The Song of Hiawatha.

“Longfellow’s magnificent poems have resonated for decades with readers young and old from all walks of life across the nation. Carlson and Hughes present the story of his fascination and inspiring life and legacy with great skill. Their insights will be of interest to all who enjoy the poetry of this extraordinary giant in our history and want to learn more about him.”
– Senator Edward M. Kennedy of Massachusetts

“I started reading American Genius out loud last night – a true test of good writing – and we enjoyed it very much. The authors painted such a vivid picture of HWL and his grandfather Peleg standing on the promontory looking out to sea. We felt the sea spray on our faces too. The book is written in such an engaging way, so easy to read and the presentation of each chapter gave us something to look forward to with strategically placed questions. The story is like a delicious meal. Just the right amount of food is placed on the table.”
-Isabel Ferguson, Weston, Massachusetts

November 2007 Book Review
American Genius is a biography intended for young adult readers. Hughes and Carlson offer a well-rounded, in depth study of one of America’s greatest poets. Although intended for younger readers, Genius is also a great refresher for adults. The book is of particular importance this year, as 2007 marks the Bicentennial of Longfellow’s birth. This Thanksgiving, why not pick up a copy of American Genius and learn about the man who wrote the Song of Hiawatha?